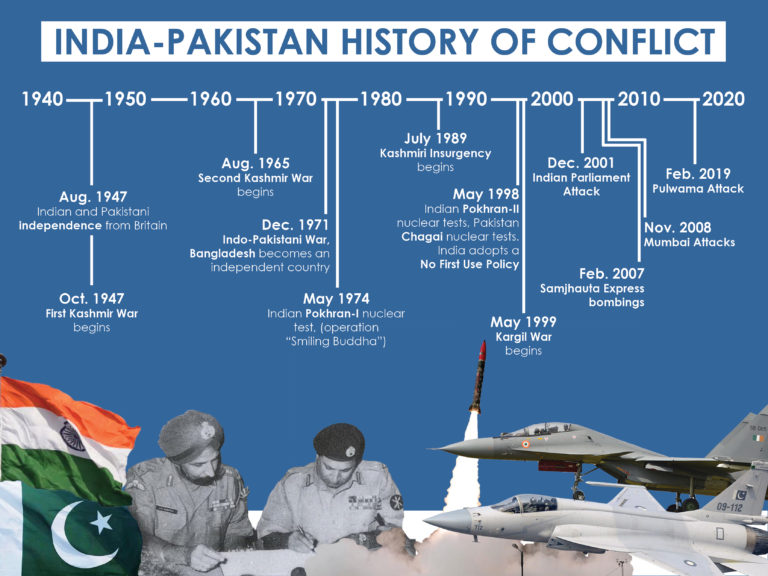 This study investigates the four major wars between India and Pakistan in the past 52 years in one Pakistani popular and one elite newspaper. Through the textual analysis technique, it was found that Pakistan print media applied nationalistic and highly patriotic approaches instead of doing professional and objective reporting on the four wars in the past. While India was criticized for war-mongering and jingoism, the warring policies of the Pakistani governments were eulogized. Though the key thematic strategies identified in this study like ‘Kashmir being an integral part of Pakistan, India being the sole enemy and the need for unity among Pakistanis’ remained consistent in the discourse, the role of UN and invocation of religion saw significant shifts since the 1965 war

Since the Crimean War, the role of media in all major wars and conflicts has been put to rigorous academic analysis (Knightly, 2004; Carruthers, 2011; Lasswell, 1927; Allan &Zelizer, 2004; Tunstall, 2007; Gaddard& Robinson, 2008; Barnett & Roselle; 2010; Aday et al, 2005; Lewis et al, 2006; Goddard, et al, 2008). The critical media scholars have identified a number of key determinants of war–media nexus like –willingness of media to play the patriotic card, self–censorship, government censorship, role of lobbies and the commercial interests of media industries (Robinson, 2000; Entman, 2004). In South Asia, a number of researchers have analyzed the escalatory role of media during wars between India and Pakistan (Seth, 2016; Thussu, 2002; Joshi, 2004; Khalid, 2014). Despite making a valuable contribution to understanding the role of media in Indo–Pak wars, these studies do not provide a comprehensive analysis mainly for two reasons. First, the available literature focuses mainly on the 1999 war between India and Pakistan and makes scant references to the other three wars which were fought between the two neighboring countries in 1947, 1965 and 1971. Secondly, most of the available work onthe subject is in the form of discrete reports produced by NGOs and graduate students. Researchers of the present study believe that for understanding the role of media in national wars and conflicts, a holistic approach is warranted more than exploring their role in an individual war. We believe that contrary to the atomistic approach for analysis of national mass media in a war the holistic approach enables one to make easier comparisons of media role and give a more vivid and delineated picture of the phenomenon in question for better understanding which in turn helps in drawing more relevant and rational inferences. Hence the researchers designed the present study to examine the role of national media in all the wars which India and Pakistan have fought so far against one another. This study would contribute to the existing literature in two ways: First, it will help us know how media system in a third world country behavesin a belligerent environment.Second, it will help us know what factors have acquired prominence in media framing of the prolonged conflict between the two atomic powers. According to Madiratta (2014), the robust media in both India and Pakistan have added new dimensions to the decade–old rivalry between them while others have lamented that media in the two countries is responsible for conflict–escalation (Khalid, 2014; Boss, 2016). Keeping view the above two objectives in mind, the researchers will first identify the key discursive themes in the leading press of Pakistan. Secondly, the researchers will record how these discursive themes vary over a period of time in the different wars.

Wars between India and Pakistan

Since separation as two independent states in 1947, both India and Pakistan have been at the loggerheads due to an array of unresolved issues, particularly the disputed territory of Kashmir. The two countries have fought four wars in 1947–8, 1965, 1971 and 1999 and still they are not at peace with one another. Thousandsof innocent lives have been lost in these four wars and despite interventions and commitments at bilateral as well as at international levels, the contested issue remain unresolved. As this study is focusing on the analysis of media conduct during wars, the researchers will try to briefly present key events in these four wars, though it is not easy to find impartial accounts due to the highly biased academic environment in India and Pakistan.

The first war erupted in October 1947 when tribesmen from Pakistan came to the support of Kashmiri Muslims who revolted against Maharaja Hari Singh’ decision of accession with India. At the time of the partition of the Indian subcontinent, the State of Jammu and Kashmir was one of the 564 princely states that had to choose either joining with India or Pakistan in accordance with the twin principles of geographical contiguity and self–determination. Though Kashmir had a Muslim majority (77% in the census of 1941), and shared a long border with Pakistan, the Maharaja refused to opt for Pakistan (Hussain 2009). To save his rule from the Kashmiri mutineers, the Maharaja requested the assistance of the Indian armed forces, in return for acceding to India. However, there is considerable debate among historians on the accurate timing between when the Maharaja of Jammu and Kashmir signed the document of accession and when the Indian army moved into the state. While Pakistani leaning historians believe the Maharaja signed the agreement under duress, the Indian historians believe the decision was made voluntarily (Hussain, 2009). The Prime Minister of India Jawahar Lal Nehru approached UN and offered holding of a UN-administered plebiscite for deciding final status of Kashmir as part of agreement for ceasefire with Pakistan in 1948(Schofield, 2000). The United Nations passed a resolution that “both India and Pakistan desire that the question of the accession of Jammu and Kashmir to India or Pakistan should be decided through the democraticmethod of a free and impartial plebiscite” (UNSC 21 April 1948). On 13 August 1948, UNSC adopted another resolution that also states that future status of the state Jammu and Kashmir will be determined in accordance to the will of the people of the state(UNSC 13 August 1948). However, these resolutions and commitments were never acted upon and even after seven decades, the stalemate continues.

India and Pakistan fought the second war in 1965. This war is attributed to two factors: First, the border skirmishes in the Runn of Kutch in April 1965 when Indian troops penetrated into Pakistani side and secondly, the operation Gibraltar which Pakistan army launched to support ‘freedom struggle’ in Indian controlled Kashmir in August 1965. According to an Indian author, Pakistani army resorted to war because it wanted to wrest Kashmir from Indian control(Ganguly 1990). However, instead of limiting the war to Kashmir, India opened up international border near Lahore and Sialkot which resulted in a full scale war between the two countries. By September 22, 1965, both sides agreed to a UN mandated ceasefire. The United Nations Security Council unanimously passed a resolution on 20 September, calling for a cessation ofthe hostilities(Ganguly 1990). On January 10, 1966, Indian Prime Minister Lal Bahdaur Shastri and Pakistani President Ayub Khan signed an agreement at Tashkent (Uzbekistan), agreeing to withdraw to pre–August lines.

This war started in March1971 when civil warerupted in East Pakistan (now Bangladesh) against the rulers of West Pakistan for their high–handedness. The military ruler of Pakistan General Yahya Khan ordered action against the suspected ‘Bengali separatist’. India intervened in the civil war and actively supported the Bengali separatists who wanted separation from the West Pakistan.On their request, India launched a land, air and sea assault on East Pakistan and in just 13 days was able to force Pakistan army to surrender at Dhaka, and took 90,000 soldiers as prisoners of war. East Pakistan became independent country of Bangladesh on December 16, 1971.Hostilities between India and Pakistan continued till July 1972 when both the countries signed Shimla Agreement and vowed to settle their differences through peaceful means.

In May 1999, Pakistani forces and Kashmiri fighters occupied strategic positions on the Indian side of Line of Control which led to an Indian counter offensive. The Pakistani military wanted to occupy terrain in the Dras–Kargil sector to provide a fillip to the Kashmiri freedom movement (Qadir 2002). This prompted a small–scale and limited war between the two newly nuclear armed states(Lavoy 2009). The international community, particularlythe US was concerned this time and actively intervened to end hostilities between the two countries in July, 1999.